The story: Inspired by students from the US, a small group of students from Trinity College Dublin joined other students from all over the world in calling on universities and other institutions to stop funding the cause of climate change and called on the board of TCD to divest its oil, gas and coal investments:

“We call on Trinity College and its subsidiaries to immediately freeze any new investments in fossil-fuel companies, and to divest within five years from direct ownership and from any commingled funds that include fossil-fuel public equities and corporate bonds.”
Fossil Free TCD petition

Five months into the campaign, on 30 March 2016, the College Board, along with the Finance and Investment committees, directly engaged with Fossil Free TCD and held a meeting to discuss the ethical and scientific arguments for divestment. At the meeting, Fossil Free TCD representatives presented the open letter with over 1,000 signatories. The meeting concluded with several members of the board agreeing with the reasons to divest.

Harnessing an array of digital tools as part of on-the-ground engagement to build a university-wide dialogue, the student campaigners:

The campaign built alliances with other student societies, most notably with the students union (TCDSU) since a mandate was introduced at a meeting of the union’s council on October 27th, 2015 and the Trinity Graduate’s Student’s Union (GSU), as well as environmental campaigning groups the Stop Climate Chaos Coalition and Trócaire.

The impact: Following active engagement with College Board, the College’s Investment Committee agreed to divest from all fossil fuel investments after a presentation from the campaign on the merits of divestment and the alternative investments the university could make.

The College Board announced their decision to sell as much as €6 million of fossil fuel company shares, including ExxonMobil and BP on the first anniversary of the Paris Agreement on Climate Change.

This also meant Trinity College would join the Divest-Invest movement, a global divestment campaign made up of over 670 institutions at the time.

Campaign success has inspired other student groups in Ireland, most notably NUI Galway in March 2017 and in Queens University Belfast in May 2017. TCD, in partnership with Trócaire, launched a national campaign – Fossil Fee Ireland­ in July 2017 as it seeks to offer support and advice to students in other third-level institutions yet to commit to divestment. 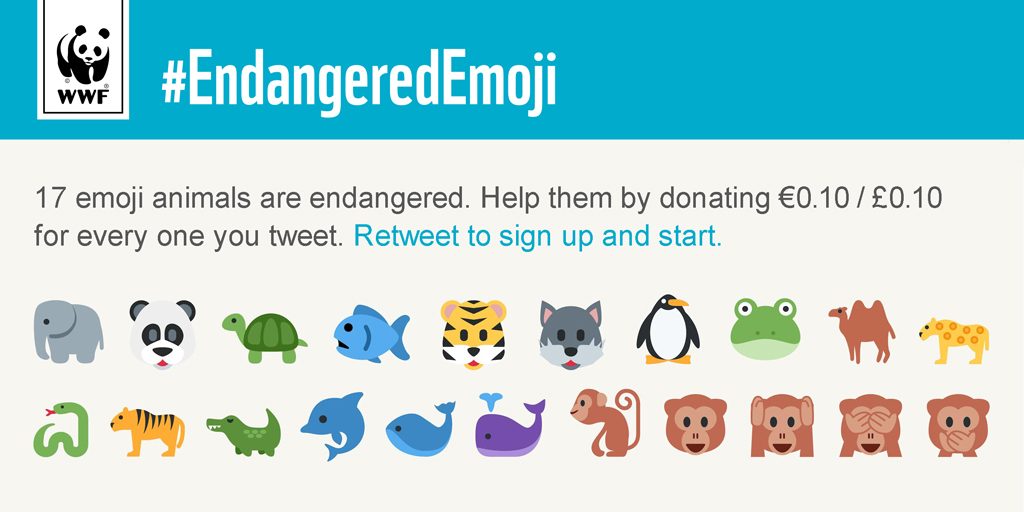 The story: The campaign sought to raise awareness of WWF in key parts of the world and to take its work in conservation to a younger audience; it had fundraising for this work as a key goal testing out this approach on the social platform for the first time. According to WWF, changing how the organisation talks to its intended audiences is key rather than ‘trying to hit them over the head’ as was the norm; the campaign tapped into a ‘natural good will’ towards (17) endangered animals and connected this with the popular emoji format.

We're using #EndangeredEmoji to save real animals from extinction. Please retweet to sign up and help. pic.twitter.com/hX1p1GEDZ9

The who: World Wildlife Fund (WWF)

The time-frame: The campaign began in 2015

The impact: The launch tweet was retweeted more than 36,000 times with 11,000 likes and 38,000 responses; there were 1 million+ tweets using the campaign hashtag; WWF gained more than 200,000 new followers and 59,000 donations in the first two months of the campaign

The concept of global warming was created by and for the Chinese in order to make U.S. manufacturing non-competitive.

The story: ‘Data on the .gov domain is no longer safe.’

DataRefuge.org was started after the election of President Donald Trump to ensure that federally funded scientific research remains available to the public, ‘under an administration that denies the fact of ongoing climate change.’

After the 2016 US presidential election, researchers began noticing changes on US government websites relating to climate change, raising the wider concern that the government could begin restricting access to important public data. Many stakeholders expressed concern that the U.S. government might remove key datasets from public access.

Bethany Wiggin of the University of Pennsylvania in Philadelphia created DataRefuge.org as an insurance policy to preserve climate and environmental data and to draw attention to how climate denial endangers federal environmental data in the United States.

The implications of the loss of datasets through defunding and deleting of, for example, NASA’s Earth Sciences Division which includes photographs of pollution changes from major city and rural developments and tracking rainforest loss over short, medium and long-term developments, have implications for scientists and researchers across the planet, not only in the US. 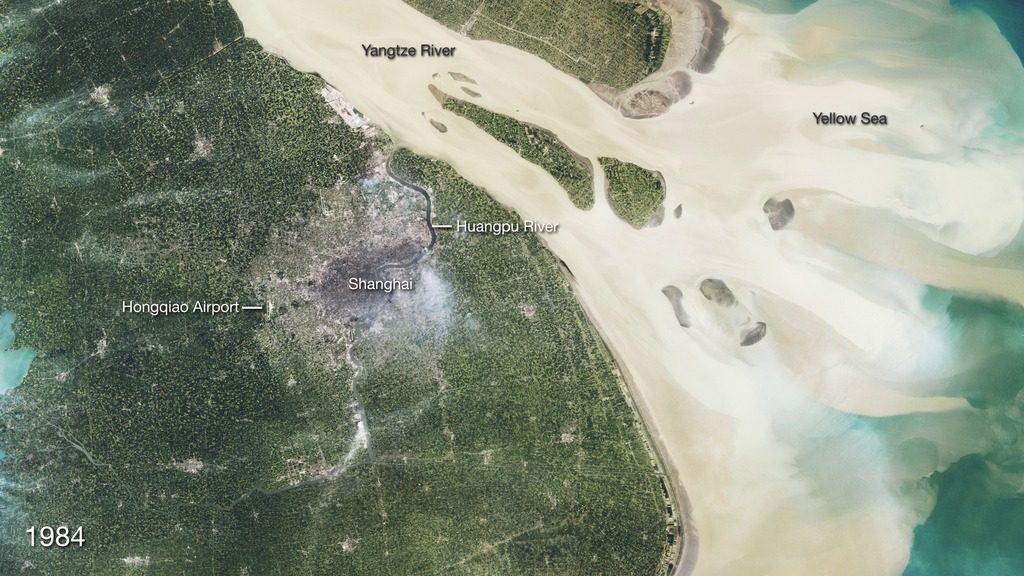 DataRefuge is a public, collaborative project designed to address the following concerns about federal climate and environmental data:

DataRefuge is also an initiative committed to identifying, assessing, prioritizing, securing, and distributing reliable copies of federal climate and environmental data so that it remains available to researchers. Data collected as part of the #DataRefuge initiative is stored in multiple, trusted locations to help ensure continued accessibility.

The ‘guerrilla archiving’ initiative operates as a collaborative exercise with the Environmental Data & Governance Initiative, Union of Concerned Scientists and other organisations to raise awareness of the cause and host work sessions around the country to archive government data. 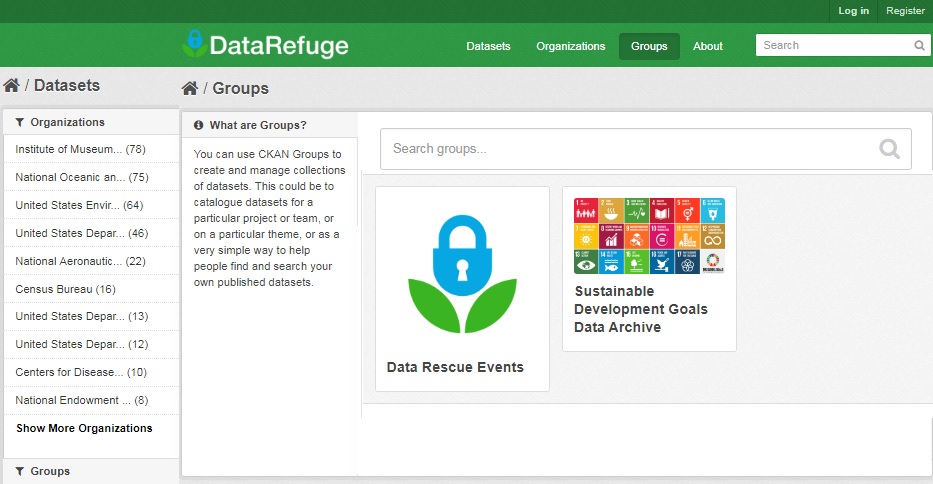 Such an honor to be on @democracynow with @internetarchive talking about #DataRefuge https://t.co/I9eJYAWkQI

Best, calmest, most rational piece I've seen so far on why #datarefuge is important pre-Jan 20 by @ClareMalone:https://t.co/xAZk3c2Pz2

Results of the project so far include:

‘Across sectors–from universities to government to journalists to public advocates–volunteer participants recognized the wicked problem that the long-term preservation of public data poses.

Archivists teach that data, like records, exist in a life cycle from creation to access through to preservation or destruction. In other words, data must be cultivated to be useful. Like any living organism today, data reside in a complex ecosystem shaped by human and nonhuman forces.

Creating and maintaining robust public data requires ongoing collaboration and conversations. By telling the stories of government data, we protect these public assets from neglect, dilution, or deletion–whether intentional or inadvertent.’

The story: The campaign focused on trying to ensure Volkswagen met the EU’s CO2 reduction targets.  The campaign was Europe wide and reached out to a conservatively estimated 2 million+ people.  The campaign made extensive use of VW’s own advertising using Darth Vader and urged the company not to go over to the ‘dark side’ (it also made extensive use of Star Wars culture, images, language and effects).   The campaign used video, webpages (www.vwdarkside.com ), a video competition, street activity and advertising, emailing, internet imaging and mapping plus gaming.

The campaign’s Rebel Manifesto asked VW to stop lobbying against key European energy laws designed to reduce dependence on oil, publicly support the EU target of 30% emissions reductions by 2020, support new fleet efficiency targets with a goal of being oil-free by 2040.

The who: Greenpeace UK, Germany and France

Internal VW sources indicated the company monitored the campaign throughout. As reported by The Mobilsation Lab, what worked well on the campaign included:

How Big is Yours?

The story: A Greenpeace Turkey campaign to protect Mediterranean fisheries focused on the extraction of young, under-sized fish from the sea potentially contributing to ‘a sea without fish’.

For the organisers, relying on technology alone would mean popular channels but little content; telling a good story but not pushing it out on the right platforms would mean no one would understand the situation, nor would they be inspired to take action. The mobile app developed for the campaign provided supporters with a small digital fish, swimming in its own smartphone-sized cyber ocean; helping the fish grow to a ‘fair catch size’ required sharing the cause with friends.

‘Fax attack’ also featured – supporters could go online, choose from a menu of text messages, then hit send. This automatically whet to the Ministry of Environment and Agriculture FAX machine.

The campaign image was that of a 9-year old boy who ‘wanted to eat fish in the future’ and the campaign video was based on a bed-room parody ‘how big is yours’ sex tape.  1,500 supporters also crowdsourced a newspaper ad on the campaign in the lead up to a crucial policy meeting.

The who: Greenpeace Turkey, coastal fishermen,

The impact: The impact of the campaign by the numbers includes:

‘Your fish would grow by 0.1 cm per share,’ Greenpeace campaigner Erhan explained. ‘And if someone signed our petition to change the Turkish commercial fishing catch-size laws via your link, your fish grew 0.5 cm.’

As explained by the Mobilisation Lab team, while it took 2,000 calls to make the undersize fish issue a policy agenda item, there were really more than a half-million engaged Turkish citizens behind the campaign.

‘The combination of ongoing outreach, traditional messaging, and innovative mobile engagement created a culture of understanding in Turkey specific to that issue. The ministry clearly understood that 2,000 phone calls represented just a drop in the bucket with respect to the country’s overall awareness of undersized and unsustainable commercial fishing practices. With 500,000 informed citizens (and growing) eager for a solution, the ministry wisely agreed to begin pursuing a solution.’

For an extended analysis of the campaign visit the Mobilisation Lab story.